Jump to Recipe Print Recipe
This Linguine with Chipotle Pumpkin Cream sauce has a warming spice from the chipotle. It’s also rich, creamy and completely vegan. 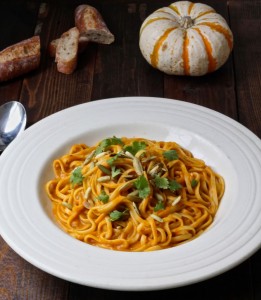 If you have ever purchased a can of chipotles in adobo for a recipe only to use one or two peppers and leave the remainder sitting in the can in the back of your fridge indefinitely, you’re not alone- I’m right there with you. The smoked, dried jalapeño peppers pack such a flavorful punch that you’ll rarely ever need an entire can for one dish, so the rest sadly often goes to waste. But this conundrum is now solved with an ingenious product I recently discovered called Olo’s Chipotle Paste.

Similar to the tubes of tomato paste you may already be familiar with- because who ever uses a whole can of tomato paste in one fell swoop, really- all natural pureed chipotle is packed in a resealable aluminum tube for a practically everlasting shelf life. And the fine paste consistency conveniently allows you to skip the step of seeding and mincing your chipotles, a worthwhile advantage in my opinion.
I was eager to play around with my new find, so when I came across this recipe from fellow food blogger Stefanie at Sarcastic Cooking I knew I had to recreate it. Her Fall-inspired chipotle pumpkin linguine is unique and and comforting, and you would never know that it’s a vegan dish from the looks of it, or the taste! I adapted it only slightly by adding a touch of agave syrup at the end; I think the hint of sweetness is the perfect thing to balance the smoky spice of the chipotle. 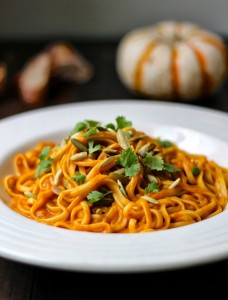 Definitely give this recipe a try- it would be brilliant as a vegetarian main course with fresh sautéed veggies added to it (think zucchini, tomatoes corn or peppers), or wonderful as a side dish alongside pan seared chicken or a roasted pork tenderloin.
adapted from Sarcastic Cooking 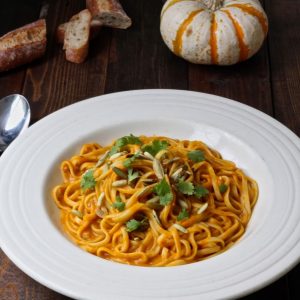 This Linguine with Chipotle Pumpkin Cream sauce has a warming spice from the chipotle. It’s also rich, creamy and completely vegan.

This would be brilliant as a vegetarian main course with fresh sautéed veggies added to it (think zucchini, tomatoes corn or peppers), or wonderful as a side dish alongside pan seared chicken or a roasted pork tenderloin.

This site uses Akismet to reduce spam. Learn how your comment data is processed.

Hi, I'm Denisse. Thanks so much for stopping by! As a private chef and caterer at my company Le Petit Chef, I have loved creating memorable meals for every kind of celebration, cooking beautiful, nourishing food for my clients and helping them balance the (sometimes many) different eating habits in their households.

Now I love doing the same here on Le Petit Eats by sharing my favorite recipes with you that are always vibrant, seasonally inspired and plant-forward.

Sundays are for cinnamon rolls, am I right? Swipe

Tis the season for all things warm+gooey+indulgent

Yesterday I mentioned having holiday cocktails on

Not mad about the holiday recipe planning happenin

Happy Thanksgiving 🍁 Wishing you a chill day an